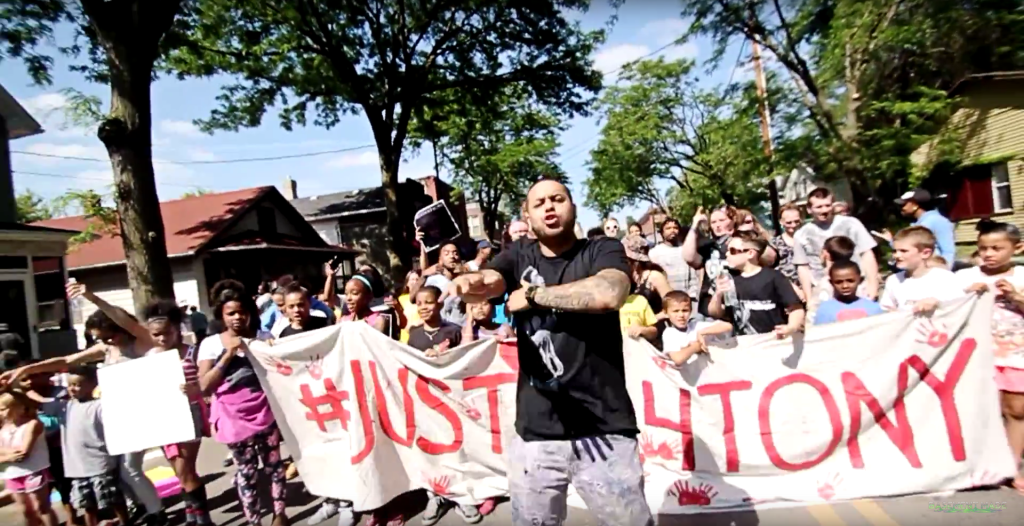 Madison, Wisconsin’s Chaos NewMoney recently dropped a heavy “Motivation” record (August 25), putting light to the March 6, 2015 murder of Tony Robinson – #JusticeForTony. For those unfamiliar with the shooting, Officer Matt Kenny of the MPD blasted a drugged out Tony Robinson 7 times to the chest in 3 seconds, from close range, leaving 7 holes in the 19-year-old from front to back.

Obviously, this incident prompted large scale protests from the Madison community, Black Lives Matter, Wisconsin Jobs Now, Black National Defenders, UW-Madison and other area schools. But as Chaos says in “Motivation” – we didn’t “city up”  – Madison didn’t get violent like Baltimore did. Instead thousands of people marched around town, airing out the police for murdering the biracial, young adult. Sadly, the mass media looks to cover racism and disorder, not unification and justice. So Madison not buying into the scheme meant that the shooting was never meant to get national coverage. Of course, it doesn’t help that Wisconsin currently has one of the most fascist, ignorant governors in U.S. history either. Scott Walker wouldn’t entertain a conversation about injustice unless he was personally held at gunpoint.

Later on Kenny would be exonerated by a DA slicked in sweat, per the script of modern law enforcement. Tony had a record and was on drugs so it was fine for him to be shot dead, yet the police feel terrible about the whole situation. Roll the end credits.

This has been a tough one for me personally, as me and Tony had many mutual friends. The shooting took place just as I flew out to Los Angeles too, so there wasn’t shit I could do about it. If you take one thing with you today, hear this: If this type of behavior from the opps continues to happen, the people will start shooting back. I know if the police murder someone in my family, I’m hunting down the shooter and ending him on sight.

“Ok, now they sick of you, now they plotting on how to get rid of you
What if they killed one of yours, what you finna do? Nigga who you gon stick it to
What if they put your little brother in critical and then called him a criminal
And then came to his funeral and shit on his name in the interview
Good lord, I can’t believe you can’t see, I ain’t going it ain’t me
Cops killing our kids nigga, I done and seen it in HD
And ain’t no police finna save me, since we having that conversation
And now when they say Tony Robinson, they gon say motivation”