Mad City Hip Hop is a fucking mess. Government officials force heavy sanctions onto local Hip Hop events and employ other scare tactics to discourage people from the genre. Frank Productions, who books all performance spaces in town, banned local acts from their venues a while back. They told me this when I tried to book a show with them in 2013. The production company refuses to make a stand on the issue, yet they continue to roll in the cash, booking industry artists to prey on minority culture without supporting it on the front end. As far as radio, 105.9 used to play some rap shit. JAMZ is more selective, as they’re also currently only accepting submissions from generic white pop artists that like to party. The University of Wisconsin will let rappers perform as long as they’re white or a member of First Wave – an exclusive program available to a select few students who grew up out of town. We need a Renaissance to pop.

Enter The Urban Community Arts Network (UCAN). Founders Shah and DJ Pain 1 are good fucking people. Tefman has been heavily involved with MHHA as well. The three have put on for the city for many years and UCAN has done some incredible things for the community. The group offers opportunities to those interested in Hip Hop, even without the city’s help. I’ve seen em pay homage to Tony Robinson on The Square, set up beat battles in community centers and plan seminars at Madison Media Institute (MMI). This past weekend, UCAN put on the “6th Annual Madison Hip Hop Awards” and everyone’s talking about it (November 7, 2015). 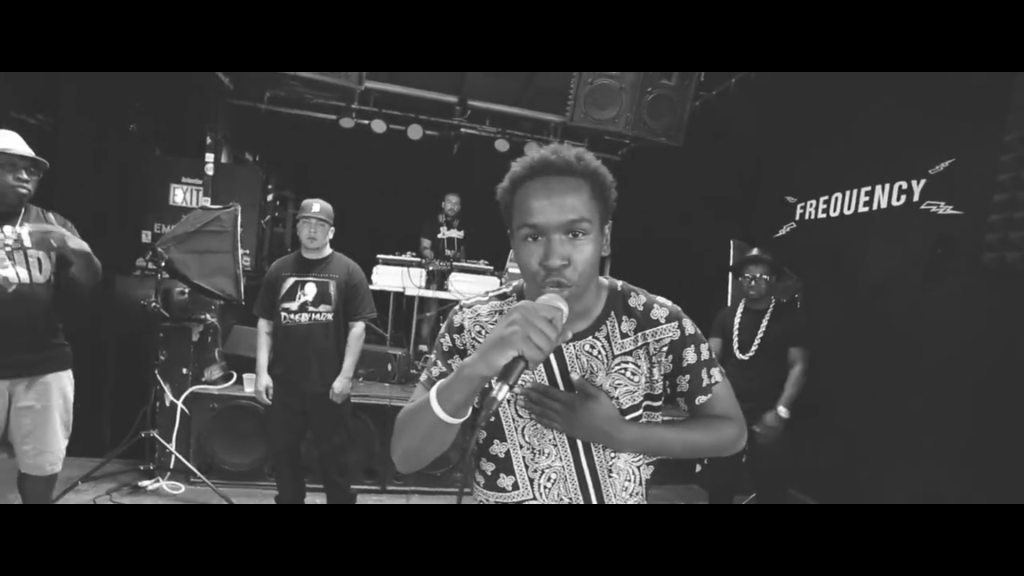 While the org has done immeasurable good for the city, many people don’t respect their awards show and I’m gonna tell you why. The MHHA voting system does not work. A public online voting system might play down the road, when people are more acclimated to the genre as a city – but not now. The “Madison Hip Hop Awards” site is 10 years outdated and the voting system is easily manipulated. The platform needs to be updated and a selection committee chosen to represent different sides of the scene.

Listen, Trend N Topic won “Group of the Year”, “Rookie of the Year”, “R&B Artist of the Year” and “Hip Hop Dancers of the Year”. WHO THE FUCK IS THAT? Here’s the song that won them all of these awards. Trend N Topic delivers an ambitious message on “What Would Martin Say”. Yes, we need a change. With the violence, segregation and drugs in the area, it’s good to see artists preaching for the positive side of things. Trend N Topic quotes MLK on their award winning record, saying “Hate can’t drive out hate, only love can.” I’m a huge fan of the man’s work and I hope everyone reading this is intelligent enough to realize I’m not hating. No one wants Madison Hip Hop to succeed more than me – no one.

These girls can’t rap or sing, though. The audio quality is bad and the video is tragic at best. This is embarrassing. Has Lil B won a Grammy for his outstanding contributions to Hip Hop? No, because regardless of the fact that Lil B would win (or would’ve won) a public vote, he is an unskilled emcee and his strong social media backing is nothing more than a tool for him to showcase basic bitch shit. These are smart girls, but if this event is to be the “Madison Hip Hop Awards,” if we want people from…. anywhere to take this seriously, the winners have to be mindblowing. I mean, I’d never even heard of DJ Sixteen until this event. That should never happen.

The “Collab of the Year” sounds similar to the type of songs I used to mix for the “Sunday Night Slow Jamz” on 93.1. But while this comparison is normally a good thing, it ain’t in this scenario. For those that don’t know, “Forward” thinking Madison has a metro population of over 500,000 people, yet “Madtown’s #1 For Hip Hop” won’t spin any local music. This dated R&B joint perfectly exemplifies a Madisonian’s futile attempt to assimilate an unreachable sound. Amy Alida has an incredible voice. The deejay probably woulda spun “Like Mine” all night back in the day. But this ain’t 2006 – this is 2015 – and this song offers little nuance to the culture. The radio sets its own city up for failure. Instead of embracing the local sound, local radio pulls artists away from their own culture and into this hokey void.

Without city support, artists have to not only blow the minds of their peers in the scene but also the minds of tastemakers from all over Wisconsin, The Midwest and the greater United States. Does this song impress me? No. Will this song impress the overcritical hipster writers from giant cities that have diverse, flourishing scenes? No. Would this record impress country folks from small Wisconsin towns – where Hip Hop doesn’t exist – where people are more reliant on vocal talent and overall sound than the lyrical message? No.

Let me put it this way: Giving away awards aimlessly like this discredits both the artistry of the city and the hard work that UCAN puts in. Chicago and Milwaukee laugh at us for this type of shit. In a segregated city, we need unity like the kind The Civil Rights Movement had with The Labor Movement. Look at the “2015 Radio Milwaukee Hip Hop Awards” lineup. Now look at ours. We need to hone our scene, not only on the communal scale, but also on the production side. Presentation is everything when the numbers are smaller. Madison has to keep it tight, and If there’s someone at the top slacking for their own benefit, we’ll soon wave this newfound wave away as soon as I sparked it.

I have worked with a few of this year’s winners – DJ Pain 1, Niko Money and DJ Victory – all beasts with this shit. Congrats. That said, there’s no reason in hell that 3rd Dimension, B. Ortiz, Chaos New Money, Soldier Click, Ted Park, Trapo and myself aren’t all over this card below. We are the new sound. Most of Mad City’s coldest weren’t even nominated. If this is going to happen we need to get real and get together.

“Human progress is neither automatic nor inevitable. Even a superficial look at history reveals that no social advance rolls in on the wheels inevitability. Every step towards the goal of justice requires sacrifice, suffering, and struggle, the tireless exertions and passionate concern of dedicated individuals. Without persistent effort, time itself becomes an ally of the insurgent and primitive forces of irrational emotionalism and social destruction. This is no time for apathy or complacency. This is a time for vigorous and positive action.” – Martin Luther King, Jr. 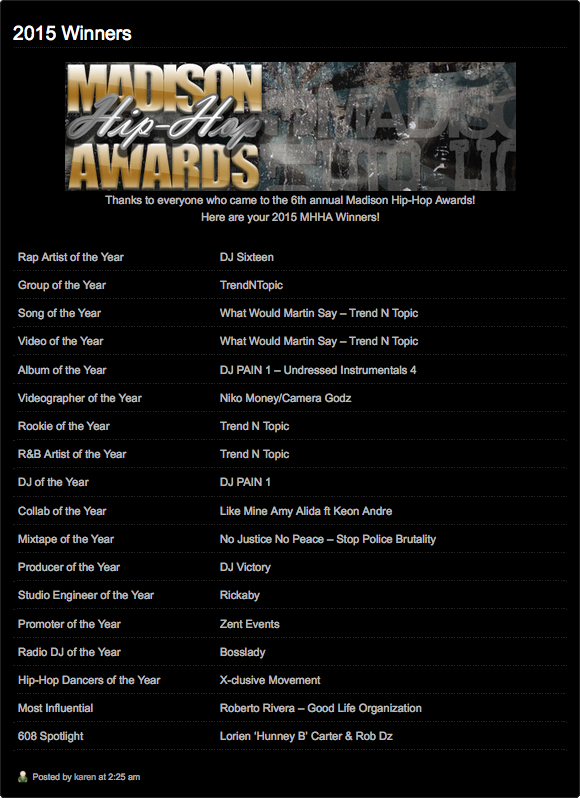