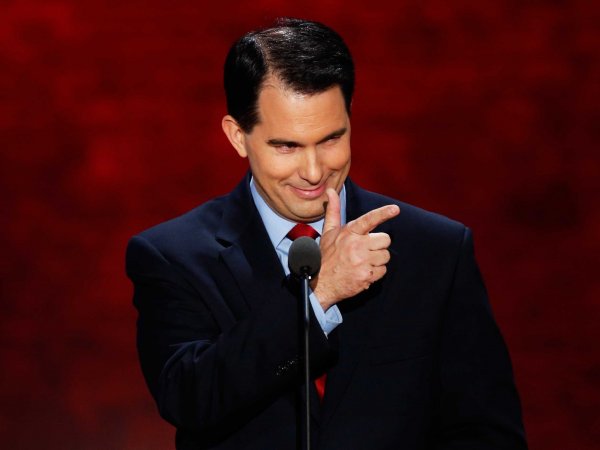 Oh, it’s just another regular day back on the homefront. Scott Walker continues to pressure the middle and lower classes, supporting his personal agenda and fascist regime. This Fall, we observe the disastrous effects of his FoodShare policy changes, among other things.

Walker’s people recently flipped the FoodShare policy so that you have to work 80 hours a month to stay in the program. Sign up and you’re immediately placed in the “FoodShare Employment and Training Program”. You’re given 3 months to get a job or you’re kicked out. A quarter of all recipients were dropped in the first 3 months…

“Since the new law took effect, just 7 percent of recipients in Milwaukee County—where about half of the able-bodied childless adult recipients live—that were referred to the program were placed in jobs, state data show.”

Scott Walker is either clueless, terrible at his job, a Nazi, or all three. Look at what just happened in the state capital of Wisconsin. News came to light that the historic Oscar Mayer plant on the North Side – and the 1,000 jobs with it – would be shipping out of state. And what was our faithful governor’s response? A childish back-and-forth blame game with an equally embarrassed Paul Soglin. In other words, our government doesn’t even take the time or effort to protect the jobs we already have, yet alone try create them, much less provide a working platform so that we can find work.

The GOP of Wisconsin is not only negligent but also actively fascist. Scott Walker has been taking away all rights, benefits and services from our people since he took office. First, Scottie did away with the train that we’ve needed since 1848. That train would’ve connected Madison, Minneapolis, Milwaukee and Chicago, creating more job opportunities and offering lower cost transportation with lower emissions. That money went to Oregon, one of the wealthiest, most metropolitan parts of the country.

Later, our governor would do away Collective Bargaining from our underpaid and overworked teachers and city employees. That didn’t change our kid’s test scores, by the way. Then he started rewarding top (richer) high schools for productivity, which takes away any extra that a struggling city or country school might get. Now, he cuts our internationally acclaimed system of knowledge – University of Wisconsin – by $250 million. Walker looks to reward the top 1% for their merits and cut out our flagship system of education. This will push the more privileged young minds to the top and force his opposition to the bottom, all while jobs are cut and tuition continues to rise to account for the lacking budget.

Our churches were helping our people too much for his taste, so our governor stepped in to starve them with his new policy. He doesn’t want the poor to eat. You were raped? You’re going to have that child, whether you live or not, whether you want that baby or not. You like the outdoors? Fuck you, Scott will destroy every square inch of the environment. You like to watch the Packers on your hard-earned days off? Well, enjoy it while it lasts, because Scott Walker is taking weekends away. Soon, you’ll be begging for a 8-hour work day like the good old days. Scott hates black people as well, as he constantly seeks new sideways tricks to target the minority group. The list goes on.

Wisconsin has been wild for the past few but don’t be afraid. Fight for what ya believe in, not what you’re told, and we will rise with a new voice in America. This is what we do. Forward.