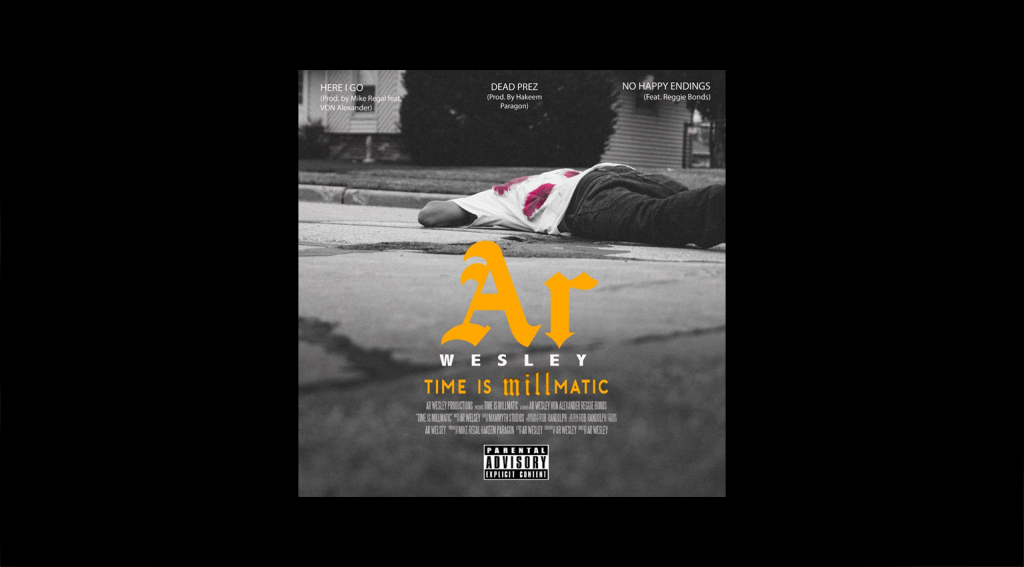 Ar Wesley took the gloves off. He’s been going with a “Midwest Coastin” style for a while. These stories are for the kids, though. The Rebel Nxtion artist, who was a part of the “Youth Rule Benefit Concert” in November, speaks a truth that we can all learn from on the Time Is Millmatic EP.

The rapper-singer hits a few different flows on “Here iGO”. He works seamlessly with Mike Regal too, coming with a spit-in-ya-face energy at first, and then switching it up to a Bone Thugs type bridge over the mechanical instrumental. Von bodied his verse too.

Ar Wesley slows it down on the haunting Hakeem Paragon-production, saying “What you thought, that I wouldn’t have nothing to say, cause I don’t PMS on Twitter like a bitch every day?” Damnnnnn

The emcee features Reggie Bonds on the final record – a “Knock The Hustle” remix they’re calling “No Happy Endings”. Both emcees have been cooking up quality music but this record really ties together their purpose – to improve the lives of those in their community. A middle finger to anyone that doesn’t support that.

“Drowning in shame, watching tears get lost in the rain
Seeing dad beating my mother, filled my heart with this rage
It’s deep, with this pen, I draw back and shoot the world with this anger
Niggas keep saying, ‘bro you gotta just take it’
What would you do?
When momma is piss poor but still laughing
Or your niece is sex educated but failed Spanish”

“I gave you dope for the pain, now I present the cure
Plus 30 keys more, if ya down with that
A role model wouldn’t even come around with that
And I got the nerve to try to serve it out to the youth
Right now it’s only a point, I’ll take you down to the root
Every boss take a loss, I’ll show ya how to recoup
The only difference is I’m cooking all my crack in the booth”