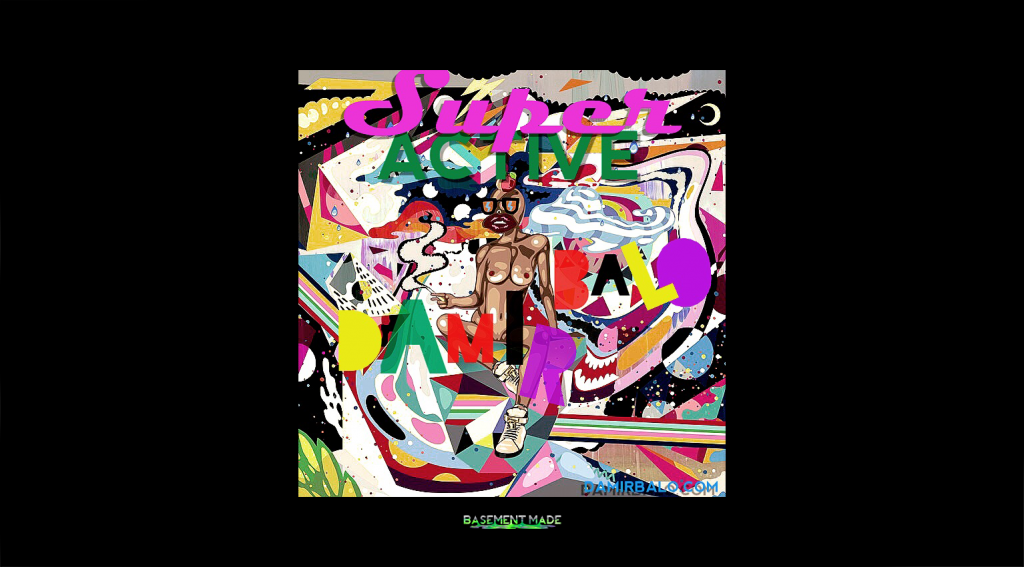 Damir Balo is Super Active with his music (April 13, 2016). This is his 5th project in the last 7 months. We premiered Stream of Consciousness at the top of February and then he put out The Kill Vol. 1 after that. The rapper claims that he and his unit have been writing records for the Beluga Heights label. His sound is coming together now that he’s spending time on the engineering side but he’ll need a little more to reach that next level. Super Active is charged by the feedback that Damir Balo has been getting on his music, and by various superhero stories that he grew up on. He went through the project track by track with BasementMade.

The producer samples the melody, drops and scratches from the world wide web, and employs drums from his beat collection on the first track. He’s constantly building – that’s his process. Damir pumps out sketch tracks the entire time he’s in the studio and then draws them together later on. He’ll get stuck sometimes, though. This one, he had sent to his associate Bili Ro$e because he “couldn’t figure out the song.” This first track is what originally inspired the project but Damir had to re-work the music to get the sound how he wanted it. “I’ll make a song, it’ll be alright… the lyrics will be there,” he says. “Then I’ll make a different song and use the vocals on that.”

“That’s that ‘Ye vibe,” he says. Damir Balo takes after the Chicago producer but likes to incorporate “90’s riffs” in his music, and soul searches through R&B and various boy bands from the era for inspiration. He also mentions Erykah Badu, Lauren Hill and Jill Scott as a few of his favorite artists.

The artist references comic book characters more than a handful of times throughout the tape. “I’m a superhero geek,” he says. “DC vs. Marvel – I love it.” I’ve heard a few emcees call Milwaukee “Gotham” but Balo is unfamiliar with the Batman reference. Regardless, the 26-year-old emcee says he’s looking to reach the masses and be “less rappy rap” on this record. “I’m tryna stay up above water out here,” he says. “Just tryna get it.”

“We the Super Friends, flowing supercharged
Grew up Shell Shocked, grew up super hard
That was back when Aladdin beat Jafar”

Damir brings the “energy vibe” on the title track, which acts as the concept for the whole project. His lyrics are quite repetitive but the beat is kinda smooth.

The artist mellows it out on the last track. He tells us that he plans to do an entire project in the near future that’ll be geared more towards his R&B-tempo songs. Damir claims that he originally wrote this last track for Beluga Heights – for placement as a songwriter – and that he’s been writing for the label “for about the last 4-5 months.”

“We’ve really built up a relationship with them,” he says (“We” being his We R The Lost team). “They were just on REVOLT TV” (“They” being the Beluga Heights songwriting team). “And we’ve kinda been working with them. We got a small placement with a small Minnesota artist.” He refers to the artist as “J-R-something” but is unable to recall any more than that. I can’t find a Hip Hop artist from Minnesota with a similar name, a recent news story between Beluga Heights and REVOLT TV, or any tie between We R The Lost and Beluga Heights. J.R. Rotem is a producer for the label, and Bili Ro$e recently had a song posted on Jack Thriller’s blog, but there’s no visable proof behind the songwriting claims. I contacted the label on the matter and await their response.