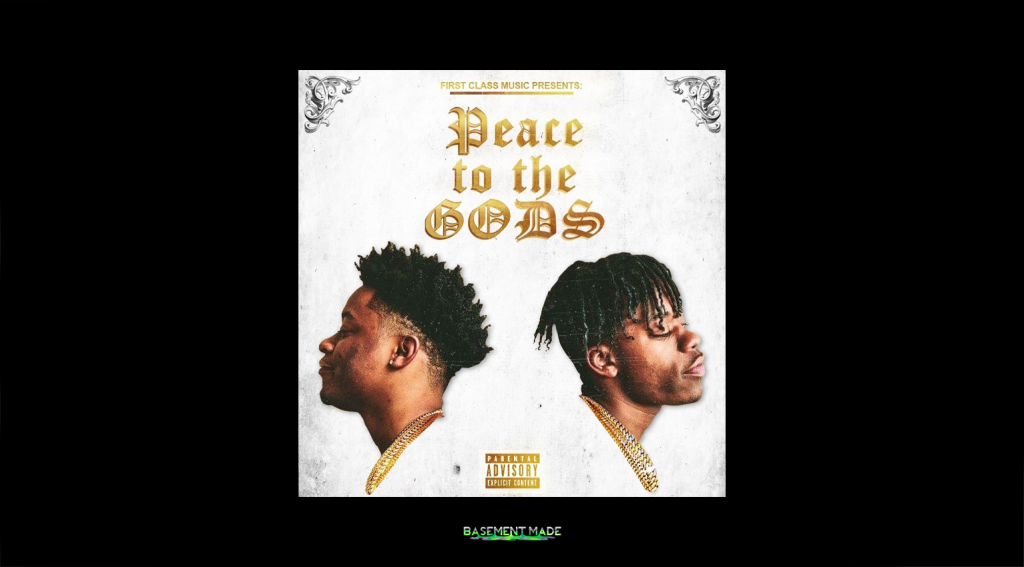 First Class is thinking outside the box in Milwaukee, Wisconsin. Although there are a lot of positive things happening with Hip Hop in the city now, The Mil is still afflicted with many serious issues. In the midst of the chaos, Skyy Phreshh has gathered a tight-knit team around his blood relatives to go full “Anarchy” on those keeping his team and the scene back. First Class uses poverty and inner city challenges to fuel their Wisco cold wordplay, catchy hooks, sinister beats and melodies. They’re working deep into “Late AM” to further their family’s future. First Class gets our blessing for their debut Peace To The Gods tape.

We chopped it up with Skyy Phreshh recently – founder of the collective and lead performer. “It’s not what people think,” he says. “It’s really a mixture of hype, trap type of sounds, with lyrical.” First Class wants to lace bangers, but they don’t want to do it like the trend-hopping rappers do. They’re looking to tell their serious story and make it exciting to listen to. “People are so into two categories – ‘I’ma be either lyrical or I’ma be a gangster rapper,'” says the leader.

Family is motivation for this band of brothers. Skyy and the other lead performer Scottie Phresh, along with their manager Juice – are all blood bros. Dionte Gray and PTTG executive producer New Kid Beats are cousins. “It was just growing up, you’d just watch your mom go through so much for these kids, and you just see so much happening around you, that you can’t do nothing about it, at that age, without selling drugs, without being a basketball player,” says Skyy. “I tried the school route. I can’t get back into school now because I owe money. I keep trying to get back into school, I keep trying these little jobs, and… I can’t feel accomplished.”

First Class dropped a couple clean visuals and a promo video this past winter. Many have taken notice, including The Illixer and Shepherd Express. They’re all working for it, and Skyy is leading by example. “I went to school for 2 years for business and marketing at Central State in Ohio,” says Skyy. The founding father is working on a clothing line called Forever Fresh and a movie script called 50 Nights. “We’ve got about 5 projects in the works,” he says. “It’s like a 3-headed dragon, we just know.”

Milwaukee and Wisconsin have struggled to get a foothold in Hip Hop, largely due to the smaller size of the cities and the toxic mentalities of many artists that compose them. This isn’t necessarily anyone’s fault specifically, but First Class is showing many folks – who are often much older – how to be an authentic artist.

“We have enough artists, enough videographers, enough fashion designers to become an Atlanta. That stuff is getting played out now, that stuff is dying out now. That’s so repetitive. I don’t like hearing it anymore. We’re all different artists, we’re all a big enough scene ourself, and people not really using our resources and network. It’s ‘Ok, I got it, I’m not gon give it to everybody else.’ You can go to my inbox and see that we’ve literally reached out to every single artist out here – at least to just build a rapport with someone.”

They’re not leaving anything up to chance. “It won’t come back on us,” Skyy says. “It’s whatever, I have no hate for anybody.” That being said, SAFS Crew Vincent VanGREAT makes an appearance on “To The Grave”. These guys are fighters and choose not to participate in petty day to day drama. “You don’t have to be negative to be positive,” says Skyy Phreshh. “Everybody feels like when it’s bad, it’s the worst, and people don’t understand that’s when you shine the brightest. We come from nothing, we never had to resort to selling drugs, we come from the same streets that stuff happens on.”

First Class is pursuing knowledge beyond the Badger State. They have a greater idea in mind and a purpose that cannot be contained to city streets. “It’s about how you carry yourself,” says Skyy. “I can shake the same hands with a drug dealer or a businessman. I balance myself. Our whole team, we balance ourselves.”

4 thoughts on “First Class Debuts “Peace To The Gods” [PREMIERE]”