Mike Regal Has Foresight On “Premoniitions” 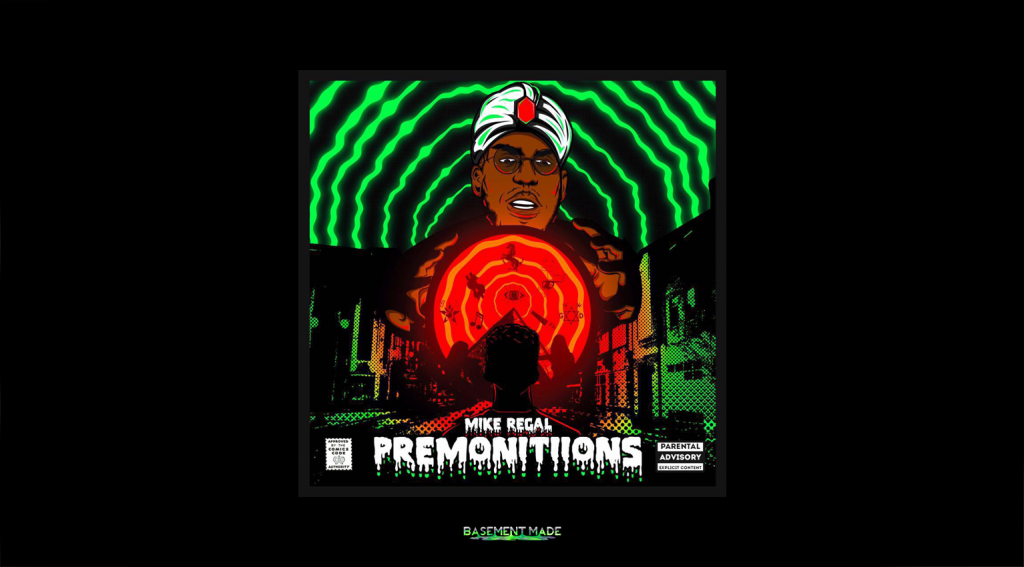 Mike Regal seamlessly fuses 90s Boom Bap with his industrial production style on the Premoniitions album (June 20, 2016). The producer-rapper is known for his entrepreneurial pursuits, and we learn a lot about the man behind the mission from his heavily anticipated full-length project.

Mike kicks it off with a serious “Tales From The Strip” joint about the violent side of Milwaukee, Wisconsin. Mike is out for revenge, with mean raps and drums, and some nice guitar on this one. He starts the tape with a relentless flow, and the breakdown at the end is powerful.

“Who did it, who saw it, man somebody seen it but nobody wanna say
I’m grabbing my heater, I roll up then load up, man somebody gotta pay
Me and my niggas been riding, the city too small, I’m outside where your momma stay
I do it like Doe Boy, I stand over niggas to make sure, young boy it’s not a game”

On the following track – “One Way” – he takes a look at the same concept but from the other side. The quick change from a street banger to a conscious record is surprising, but really speaks to the complicated nature of Mike’s artistry and how he interprets his surroundings.

“Bang bang, nigga we don’t need each other
Bang bang, you ain’t never been my brother
That’s the plan, let em execute each other
We’re all going one way, people or nothing”

The hardworking artist speaks a lot on his grind and mission on the project. He has an old school flow with a huge vocabulary, but crafts his records with a new age production twist.” Mike grabs a smooth feature from CamB on “Ocean Front”, giving us a look into his earlier life.

Only bring food for thought, when you cater to my mental
The illest with instrumentals since the 2nd grade
Popping Pencils, later on, same lead played the snare to my drum roll
Leadership Acad, I’m Questlove in that lunch room”

“CEO Leadership Academy was my High School,” he clarified to Basement Made. The highly educated emcee dropped a video for “Keep Smoking” last year.

On the Premoniitions title track:

“I know that the realest is feeling me
The shit that you doing ain’t hitting me
You trying but it will not get to me
Of greatness, I will be the epitome”

The “3005” joint has a coo funk to it. Lex Luther and CAMEone assisted on the beat. Then there’s “Business Man”, followed by a pair of jazzy records.

Near the end of the LP, we hear a couple of smooth records for the ladies – “You” and “Pain”. We placed the ladder on DX. These are a great change of pace on the project.

The multi stays cooking up in “Regal’s Laboratory”. He leads by example, and continues to produce quality original music through all the noise happening around him. Anyone that can elevate to this level from Da Mid is impressive. This man is doing it from Wisconsin, which is pretty much the toughest place to make it in the region. I’d say Wisco and Indiana (Rust-Corn Belt states). The music is being made but the money just ain’t in rotation. Enter the huge indie scene in The Mil.

Mike Regal speaks a lot on his own personal successes and wishes the best for his team and city on the Premoniitions album. He has a bigger idea in mind, though. “Progression, Awareness & Focus at its highest levels,” he told us. “I covered a lot of ground but my main goal was to give my best first impression to the world I can as well as Inspire people to be great at whatever they do.”