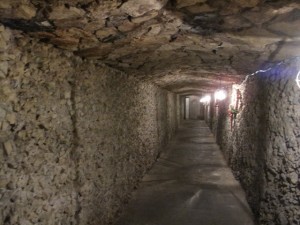 There are underground tunnels running all under the Madison, Wisconsin Capitol and the UW-Madison campus. I was chopping it up with someone about the hidden tunnels under my old apartment building at 1954 East Washington. A “Contagious Hospital” was built on this same land in 1892. It was also known as the “Pest House”, according to the Emerson East site. The hospital was for people with smallpox, scarlet fever and other communicable diseases. Another contagious hospital was planned to replace this one on the same property. “The new building would occupy land that had been plowed in 1916 with one of the first tractors in the Madison area to provide space for a War Garden”, according to neighborhood site. Madison architects at Claude & Starck and contractors at J. H. Findorf and Son assisted in building the new hospital in 1924. Wisconsin Neurological Foundation took it over in 1953 and turned it into a place for people with so-called disabilities.

After all that craziness and death, the building was flipped into low income housing in 1990-91 and has been used in that way since. Now it’s called The Avenue. The park in the back is named after James Graaskamp – a UW Professor known for his early contributions to the real estate industry. He spoke to the “insider-outsider” problem, which is still a major issue today with affordable housing, gentrification, housing discrimination, slumlords, and the housing crisis. I was evicted from this property after I was forcibly hospitalized and diagnosed with a mental condition. Madison Property Management made me pay thousands more after I’d moved out, and Madison Emergency Physicians just popped up on my credit report with a $1,500 ambulance bill from February 2019 that should’ve been taken care of by BadgerCare and/or Quartz over a year ago. Slaves know they love sending the ambulance, so they can bill you for it even when you don’t need it, and in my case, so they can bill you for it twice.

Anyway, a few of my neighbors there told me about the tunnels connecting the buildings on the property. This made a strange amount of sense at the time, because over the course of my studies in 2017, I discovered that there were tunnels underneath many sidewalks in the downtown and campus area. A technician told me this nonchalantly after he walked out of this lockable entrance on the sidewalk. So I was already getting used to the idea that there are people in tunnels underneath us sometimes and we’re not told about it. But this guy today, who used to work in state law enforcement, says that there are tunnels underneath the capitol that used to be used to bring in military. I look it up quick and apparently Scott Walker used them to evade exposure to the public. There is a guy named “Tunnel Bob” with a Wiki who has apparently made a name for himself by extensively exploring the steam tunnels in Madison and others in Milwaukee. There was also this guy who was allegedly planning to bomb the UW tunnels in February of 2019. Side note: my bank since 1999, Summit Credit Union, used to be called State Capitol Credit Union and was located in the basement of the Wisconsin Capitol.

I’m realizing more that I should talk about my visions because they seem to be coming to exist in real life in abstract ways, and I it helps me flesh out what my mind is trying to tell me when I speak it out. So in this particular vision that I’ve been having since 2017-18, I see these people sitting on computers in secret basements underneath housing units. They generally get in by tunnel or stairs to the basement, and sometimes by secret door. I see them sitting at desks, in dimly lit cubicles, watching grids of cameras on these computers – of the residents living above. This operation is somehow aided by corrupt utility workers around town. These people are monitoring residents using personal devices and hidden cameras, playing games with them using built in torture contraptions. Some examples include “Dead Switches” to covertly turn on deadly electrocution and gassing in rooms or parts of the residence, 3-dimensional “Nanite” grids invisible to the naked eye used to produce images in someone’s living space like CGI, a coding program that lets them type in messages that are then broadcasted through various frequencies of radiowaves directly to subjects’ brains, and hidden passageways with one-way glass through walls of the building. Some get paid to do it and others pay to join in. Many justify this game with strategically worded fine print on leases that was signed-off on by tenants, a technicality with low-income properties having dual legal designation as housing and medical facilities, institutional religious racism, stress and personal issues. This practice is especially common under high-density complexes where there are more people, low-income housing, shelters, hostels, hospitals, capitols and homes of agents paid to experiment on their children, family and friends as a part of this hidden government bloodsport program – inspired by ancient beliefs in race, religion and slavery. Sounds like a movie? Of course it does. This is my life.

I thought I recently read a piece about humans living in the Vatican Necropolis but I’m not sure now cause I can’t find it. Drop that below if you got it. Also, see this and that list for some more secret and lived-in tunnels in New York, Bucharest, Moscow and Warsaw. Coasties call them “Mole People”. There’s also the Washington Tunnels under the U.S. Capitol and all the poor folks in weather tunnels in Las Vegas. I don’t know about y’all, but when it comes to secret underground tunnels and living in sewers, I only remember being taught the Underground Railroad, Teenage Mutant Ninja Turtles, supervillains, monsters and urban folktales.

it all started in the basement…