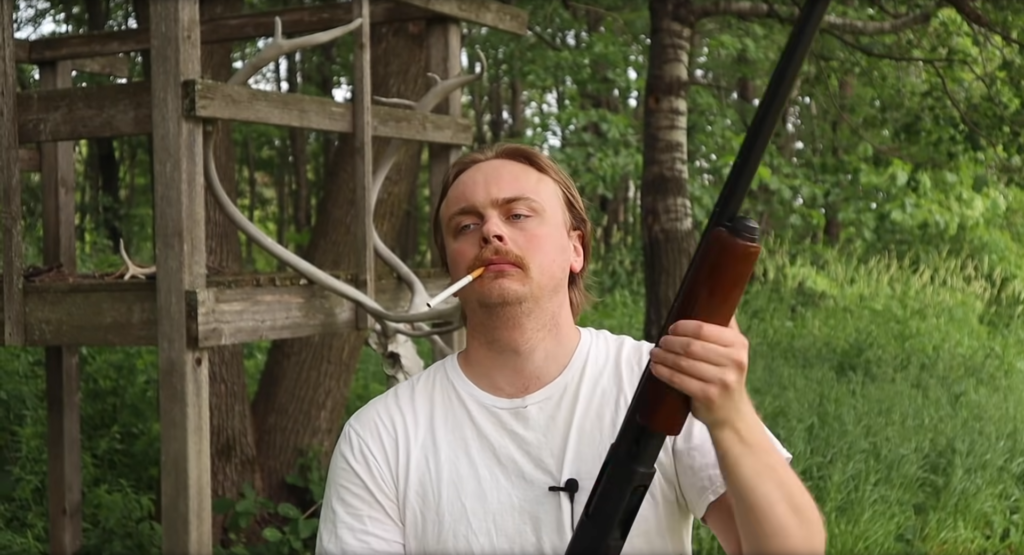 Wisconsin has a unique kind of bite. Folks know the flavor. We haven’t been allowed the spotlight yet but the future is looking brighter as the culture begins to develop its palate. Gus Johnson is from Grantsburg, which is about as far out from the Twin Cities as the more well-known places St. Cloud, Mankato, Rochester and Eau Claire, but a lot smaller. Wisconsin is the hood side though – the ethnic community side, the hoodie side, the industrialized, shaded side. He makes fun of Hollywood a lot, and the actor+ is firmly a part of it now after moving to Los Angeles, California and landing a deal with Comedy Central, but he seems to be retaining the way he critiques social media and the popular kids for now. I hope that never changes. His brother Sven is in this one too. Ya gotta love that blood bro aesthetic.

Gus is known for challenging traditional American customs in a non-Black and White way. He’s not shy to touch on difficult topics, which is a quality of the area and a thorn in the side of nationalists obsessed with whitewashing and blacklisting everything, and he often does it in an educational manner, so the forefront message is not to disrespect honest working people with escapist delusions and gaudy materialism, but with the apparent intention we come out the other side with new ways of looking at tough subjects that were previously outlawed by the arbiters of consciousness. Mr. Johnson is one of the best to ever do it. And he’s an engineer.

The comedian has a smart, silly, refreshing perspective on the system. He’s a musician as well. His channel has been open for about 10 years now and I’m excited I finally found him through the algorithm. Keep repping the hood Gus. Wiscompton forever. They really hate it when we say we’re from the hood, because we’re not the full on stereotypes that they want, us exceptional beings, so we’re not allowed to say that. You’re supposed to be a mouth-watering example of Blaxploitation or “Spanish is a Romantic language” – glaringly Black or Mexican, strung out and messy, living in an urban environment or whatever, surrounded by cement and metal instead of dirt and wood – to qualify for vocalizing that scientifically accurate statement.

I don’t think recent immigrants to America are taking jobs from hardworking people as much as this shadow domestic metropolitan exchange system that’s supposed to bring in diversity from other states, that only works one way in Wisconsin’s case, instead playing out like big bank take little bank, foreign voices from just across state lines drowning ours out, keeping locals from representing their rooted identities socially and economically – whoever they are. Easy to laugh at something when you keep it caged up in the basement. Also, recent immigrants are usually interesting, in comparison to these classically-trained fart-joke Americants.

Speaking of Wisconsin, Black and LA people, how about Wakanda? I grew up making trips up to the Menomonie area to hang out with the fam bam, which was always a great time, but I never knew I was visiting such holy ground to the African empire of the Marvel Universe. Gus may know. He went to school at UW-Stout in Menomonie. I knew we had cougars but Black Panther too? I hope Chadwick Boseman was a good guy and he’s in a better place now. Maybe he was a excellent person and he can decide to come back in a new life as an actual panther if he wants.

Wakanda is a place in Wisconsin. Their representatives don’t mention that on purpose, though Marvel appropriates Midwest culture heavily. A central tenant to the American way of life: never mention Wisconsin if at all possible, and when necessary or advantageous, make it compartmentalizing. But Wakanda is not only a place in my home state, it is a sacred place to the Wisconsin First Nations and has been for hundreds of years longer than Marvel. No royalties of course. The name itself means something like magical power, god creator or life force. This is according to the Omaha, Ponca and Osage tribes, and it can be spelled Wakonda too as it is in the area elsewhere, but this place in Wisco has the same exact spelling. The Lakota and Dakota spell it sumn like Wakan Tanka.

So what about Wisconsin? That kinda sounds similar too right? Well, Misko translates to red in the Ojibwe language, and Sin to place, so that goes along with the prevailing mispronunciation theory – that Wisconsin comes from fumbling the Miami word Meskonsing to Ouisconsin to Wisconsin. Misi also translates to great, like in Mississippi, for great river. The Wisconsin River (and state) sure is a great red river place but I’ve heard this explanation before and felt unconvinced, so I looked further this last time around. I’ve come to realize that this part of the world is much more important than they make it seem and it has been that way for a long time on purpose. They’re trying to squeeze natives out at all costs. They don’t want festivals, nothing.

In the Dakota and Lakota language, Wi is the god of sun and moon or day and night, Skan is the god of the sky, stars and universe, and Inyan of rock. Also, Assin and Ahsin mean stone in Ojibwe. So this is God’s land. I know the brainwashed think Menomonie, Superior, Green Bay, Milwaukee, Madison and these other important places around my state are just suburbs of the privileged and thus undying supporters of the Minneapolis-St. Paul, Chicagoland and LA way of life, but these tribal lands have been fostering unique, hardfought communities for thousands of years. Great Lakes Natives are the best. These guys have the “Owner’s Manuel” like Charlie Hill said. I’m sad he’s gone. Maybe he’ll come back as a lion and eat all these rich pussies.

I read somewhere that Wisconsin translates to Wēskōhsaeh and that means a good place to stay or live. Let me know in the comments where that was please, and as always, join in the convo if you have productive things to say. Before I finish though, I want to cover the modern American translation that I hinted at in this press release for my recent short film.

Break it down wit me one time:

And I’m still not worthy of an entry level position in creative, technical, copy or science writing. I bet my bottom dollar someone randomly selected from the Twin Cities, Chicago or LA is though, as they’re looking for that widely accepted voyeuristic outside-looking-in role reversal perspective so popular with the little kiddies. It’s been said that “Madison is 30 square miles surrounded by reality” and we’re “living in a bubble” here, but they rarely know more than 1 side to what they’re talking about, regardless of where they stand, so of course they don’t know the 5 W’s to Beef. Ya boy dubbed up.