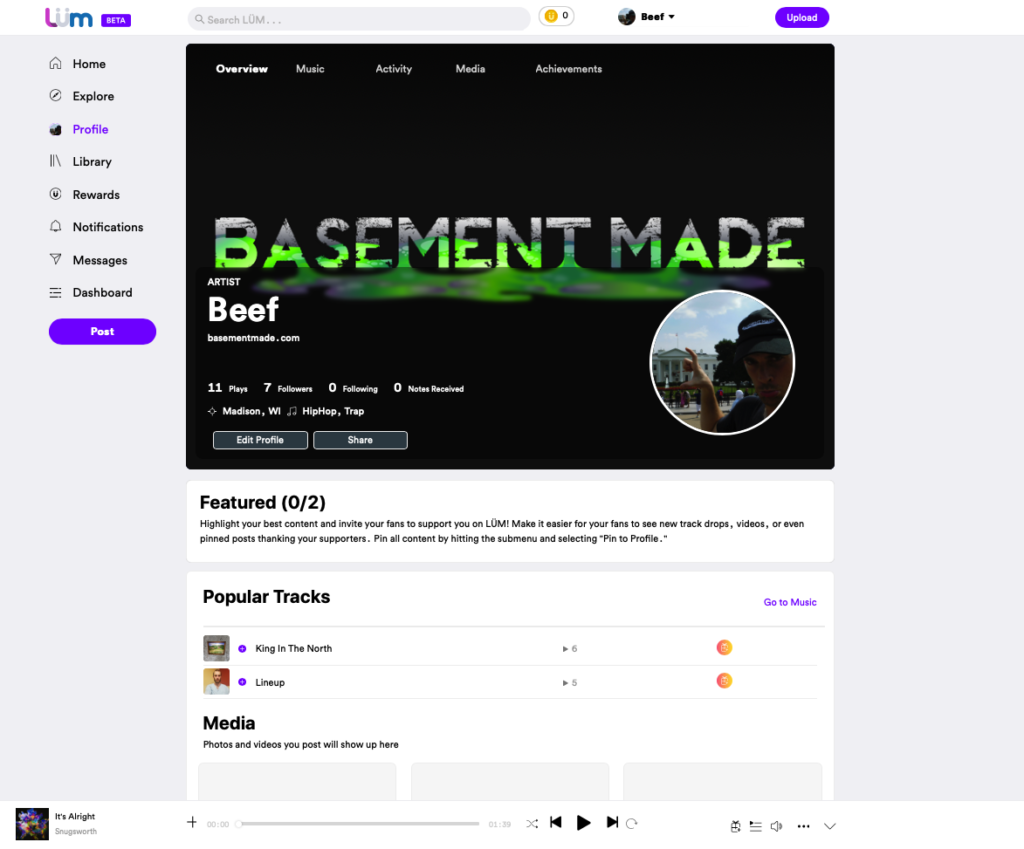 UPDATE (11/22/20): The numbers have not changed since the first day or so of my initial sign up, leading me to believe they have some sort of algorithm set up, like most scams, to give you some followers and likes when you first get started. This makes it appear that the application works and is not slanted heavily in the favor of white collar/industry/administrative/fed/corporate “artists”. Can’t be sure quite yet, though. Check back later.

Sadly, many ideas in Madison would never see the light of day without the UW-Madison student papers. I’ve applied at Wisconsin State Journal, Capital Times, Isthmus and all those fascist newspaper places and haven’t heard back once – not for full time, part time, day shift, night shift, minimum wage, no pay, nothing. This is 100% fascism and slavery. Same with all the fascist news stations Fox, NBC, ABC, CNN, GOOGLE, ETC. Again, 100% fascism and slavery. One of the only places to allow me to speak was The Badger Herald. Much love. I didn’t have the freedom to write about what I wanted or what was most important but leadership is a whole different monster of theirs.

This piece on LÜM (Live Undiscovered Music) caught my attention as I was reading through this latest email from Bascom Ventures, which is supposedly a venture capitalism firm for us UW-System graduates, and our friends of our communities centered in Wisconsin, so of course it’s based in Chicago, Illinois and Basement Made gets zero words and money. Their site says Bascom Ventures is “A smart, simple way for Wisconsin alums and friends of the community to add venture capital to their portfolio.” Apparently, Keaton Nankivil joined in. He’s a hooper from Madison that went on to play European league. I played against him in high school and love hearing that’s a possibility for local American players, as it is for non-American players.

So I look into this article on Live Undiscovered Music, featured by Bascom Ventures, and the second paragraph reads:

“But in an age of streaming media, a new voice emerges in the mix. It’s not loud, but it’s growing. It’s the sound of a new generation — aspirant, empirical, revolutionary. It’s music, written and produced, by undiscovered kids in their 20s. More often than not by college students.”

More fascism. The new voice is not college kids in their 20s. This does seem to be one of those Millennial-Gen-Z things though – that classism, agism and trendy racism is the key to the future. So by this logic, they think all the college students should be allowed to speak over the non-college students – one of America’s most historic problems. And Ne-Yo is the company’s mascot. Is Ne-Yo a college boy too then? Or does he get a token pass?

Don’t take my word for it unless you’re smart. Go ahead and Google “Madison Hip Hop Artist”. I have done this on a few computers and see in order from left to right: DJ Pain 1, Ted Park, and then Beef. But the first article to come up is a Reddit post that I am not in. And as a matter of fact, DJ Pain 1 is not on the list either, and they have other producers in there. They also have many people who are not even from Wisconsin the state on there. One of the only artists with a comment next to their name falls into this category, “Yung Gravy – A madison legend for sure”. He spent a few years on campus for college. I’m not from LA. I was born and raised in Madison, and have also dropped music publicly on the internet every year since 2009.

I should mention that back in 2018 I had an extended conversation with Endre Krumholz – their Director of Music Partnerships and Artist Relations for LÜM. He told me all he could about the company, which was great, and eventually asked if I wanted to be a Brand Ambassador for them and write about local artists they sent me. That didn’t work out as I wasn’t writing nearly as much about other artists as I was before and after that. Also, there was no pay and I’ve learned that just because you blow your competition out of the water and have big names on your resume, that doesn’t mean anyone will ever allow you social mobility or recognition for your work.

Obviously, I wanted to upload my music either way and see what this new streaming service was about. After contacting their IT guy Derek Zenger, I was finally allowed to make a profile on LÜM after years of being locked out. Their site wouldn’t allow me to make an account with any of my emails but the gatekeepers finally allowed the untouchable past the line. The site is slick. It looks like an iTunes-Soundcloud mashup. I uploaded 2 of my songs and left them there. Those have 5 views each a few days later. I also gained 7 followers. This is (possibly) a good sign – that the algorithm allows some freedom to the listener and musician. However, these views have not changed since that initial bump. This is a sign that those were just spammers and scammers clicking on a couple songs, clicking like, hot keying some comment, then moving on.

Unfortunately, I see that you can’t even click on your location to load others from that municipality or area. Without a primary emphasis on local first, America will only die faster. This is not a threat, it’s a foregone conclusion. So does it even matter that this company was founded by UW students if there is no element of local culture and this idea that college students for some reason make better music than non-college students? Do they think that we all have a fair shot to go where we want to school and study what we want to study and get funding for our business love children or some other utopic bullshit? This is certainly not how it is for people from Wisconsin, myself especially.

They want to replace us with plants, and not the green kind. I hope Live Undiscovered Music is with The Basement. I do. Of course, if you get $1.2 million in seed money from Frank Productions (another place I’ve applied countless times with no response that runs a well-known fascist monopoly on Madison venues under the mantra “no local music unless it’s west siders and college kids not from here”), you wouldn’t give a shit about culture either, you’d just be interested in finding a placeholder to brainwash the working class further into believing in this nation’s propaganda art made to self-retard the populous factory-powering sludge.