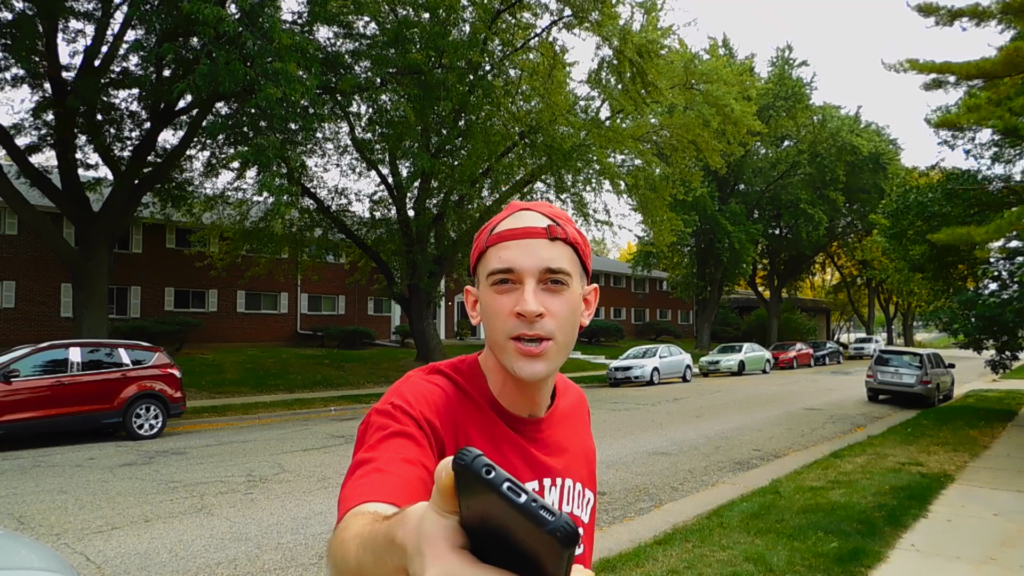 The politics people do the polls remotely over the phone and internet but we have to vote in person. We just did the Census mostly online for the first time ever, through the pandemic, and they can’t figure out one day of work. Also, one of these processes is much easier than the other. All we need is a simple clickity-click typity-type application with an identity verification system and then undoubtedly millions of more people will vote and the polls will absolutely be more accurate. Of course, voting remotely is also safer, you don’t have to smell all the rancid dead souls waiting in line, and it might help save the Northwoods (if Donald Trump doesn’t level it first). An E-Democracy is where we are heading towards down the line, especially in regard to voting.

I move around a lot, which is a sign of someone who moves around a lot. In some of my cases, it was been due to overpriced units, false advertising, harassing neighbors, neighbors that are all elderly, screaming children, and pudgy whiny parents, mold in vents and walls, leaking windows, doors and ceilings, exposed wiring, non-functioning heat, thieving roommates, fascist conservative-liberal roommates, slumlords, yearly increased rent, harassment from property management, polluted water, no hot water, no windows, no ventilation, stalkers, rodents, bugs, moving for work and school… We live in a time with increased mobility and we seek what we think is best.

I have a valid driver’s license, which is physical, but my check stubs are online, my utilities are included in rent (which is payed online), and my lease is online. If they really gave a shit about the accuracy of elections, and if electronic documents are considered legitimate, we would have this digitized and ready with fingerprint (and maybe retina) scanners for this 2020 election. They can’t do that simple task but they can spend trillions on the military. We need to protect America from attack but to do that effectively we need to elect the best possible people to represent it and identify those trying to limit our safety and freedom.

And we’re doing “Favored Nation” for drugs? But not all drugs, just certain drugs, and mostly pill drugs? So we’re going anti-globalization with a sprinkle of mad scientist pilled? The way these people attribute an entire nation to one negative thought process, and then double back and claim their business as legitimate. They should get a buzzer for that. Like, we get to electrocute them if the more they lie and contradict themselves. Maybe we start with standard issue police taser voltage and go up from there? For treason, I think that’s fair. But I agree medicine should be affordable to all who need it. I don’t like the Individual Mandate either. Donald Trump has

They say socialism could never work but also that America is the best and can do anything. Every single person I’ve ever met that is vehemently anti-socialist is either a pathological liar, self-retarded, racist, sexist, or all of the above. Their people often confuse themselves with fantastical imaginary versions of what a socialist is based on what White rappers and Black rappers, or their generation-appropriate clones, who don’t see themselves as White rappers and Black rappers, say. It’s this entry level analysis of anarchy-to-Marxist-socialism-or-communism through the lens of how tariffing and embargoing American materialism and culturelessness has depicted these foreign entities. Ya know, ewww gross Cubans, Russians, Chinese, Canadians, Scandinavians…

America needs both a massive redistribution of wealth and large scale reevaluation of currency. I have heard “MMT” chants during the last two Donald Trump speeches in Wisconsin. Mr. Trump, of course, does not say anything about MMT when he hears the chants, though he does like playing a certain Bernie clip to go at Joe Biden. Like real estate, insurance, marketing, human resources, criminal justice, and the stock market, banking and government should be phased out completely as much as possible. That is, if you want to get paid as close to your worth as possible, with chances of advancement, education, health, physical safety, and freedom of choice – based on your contributions.

The MMT people argue that countries can run on a deficit. This is obvious to anyone who has spent significant time in the working class. America is a wasteful garbage heap and its leadership is trash. I love America. Obviously money is not worth what they say it is. All these bleeps I witness daily with nothing to offer but whininess and privilege is the peak of money. Money is not of the high value claimed. Money appears to be going to the least worthy people, actually. Black and Native people go through the most, relatively, in comparison to other groups. This should mean Black and Native people have the most money, as they are subjected to the most literal attack and supplementary work to get to where they are trying to go. Same with myself. I should be a trillionaire if money was allocated based on effort, production and merit.

Just because they’re “good looking” and “well spoken” (which are both anti-working class and anti-ethnic statements) does not mean they have any meaningful value. I have a more dynamic flow, wider range, and more diverse vocabulary than any of them. I can cover more topics with more direct experience and more unique insight. Yet, who are those considered legitimate? Those with the play money – the fiat money. This money is not allocated based on the level of difficulty for a task achieved. This money is not given to the most intelligent. This money is not allowed to working class centers. We have to go into debt to have a job chance (there are no job guarantees), just to satisfy whatever private interests determine is most profitable and thus “what we need”. Inflation happens when lazy douchebags are put in charge of our money, and they should be held accountable.

America’s money is essentially given to those who don’t know its value and thus don’t know how to spend it. Look at what they spend their money on when they rich. Notice how they don’t reach another level of consciousness, business, or invention. They just have possession of money. Realize how little these people are doing for how much government-private business they retain. So much of their power is maintained just because they’re unavailable, unrelatable, unreachable. Most people desensitize to celebrities the more they’re around. Ask anyone from privilegeville.

The reason why these meaningless, pointless people have so much institutional currency is because they are approved by the system to possess it. Look at how laser focused they are in figuring out the money printing question, as if we need or should need banks at all. As if we should even be using this stupid paper and coin currency that is not worth its raw materials, or is somehow backed somewhere by gold, silver, diamonds, flesh, and all yee most valuable treasures – arghhh.

I don’t know about y’all but I’ve been in the lowest tax brackets for almost 15 years now, and I still have to pay about 25% of my paycheck to taxes. What am I paying for if only to make my life worse? The fact that anyone anywhere gets to do something period with even one penny of my taxed slave wages, without my permission, is fascism. I want special programs. Random question: Why do police across both lower 48 and all of America use this fake Upper Midwest accent when they become cops? Who designed this culturally appropriated linguistic regime? I feel like my voice is not being heard and it’s supposed to be that way.

Anyhoosiers, whiny bleeps with money, big government, medicine, media, and otherwise, all seem to suffer from this delusion that we give a fuck if you are a rich bleep who works for the government or a rich bleep who does not work for the government. You’re all the same. One of you prints it with a machine, and the other prints it with policy. Either way, none of you want to recognize that your jobs are not necessary, that they’re both easier and more sought after than the lower paying, more difficult, less sought after jobs in this nation, and accept lower amounts of money to do these jobs. The dollar is still made on the back of the American slave – largely domestic. The white supremacist and/or fake diversity plan don’t work.

They’re doing as close to nothing as possible to better categorize our populations in order to prevent further Rust Belts. We should be trying to define our communities the best we can to prevent disasters like this, suburbanization, and now fixes with opportunity zones. Their city planning and foresight was dead hundreds of years ago with the Judeo-Christian-Greek-Mediterranean obsession that was dead thousands of years before that. Safety nets should be built in when lives are on the line for the country. You don’t need to be serving in the military, or even the police, fire or Ems, to be putting your life on the line for this supposedly great nation.

Their institutionalization of monetary value is possibly the #1 worst problem in American history. That’s not to say we can’t attribute monetary value to a product of institution, because that makes sense to some degree, as we live in a physical world and larger triangular bureaucracy seems to be the most effective organization we have today to reign over mass groups of individuals, but to say that monetary value be decided upon by institution – is a system designed to take advantage of labor. They don’t get this either: We can be living in a capitalistic economy, and democratic republic political system, and still be limited by authoritarian means which socialistic policy could help. This is not surprising to anyone with basic economics knowledge. Fixes take work, though.

I identify as an independent, independent of all other independents, as all people who wish to be independent should. Hard work does not pay off in America. Neither does voting. Hopefully down the line. Vote for whoever you want.