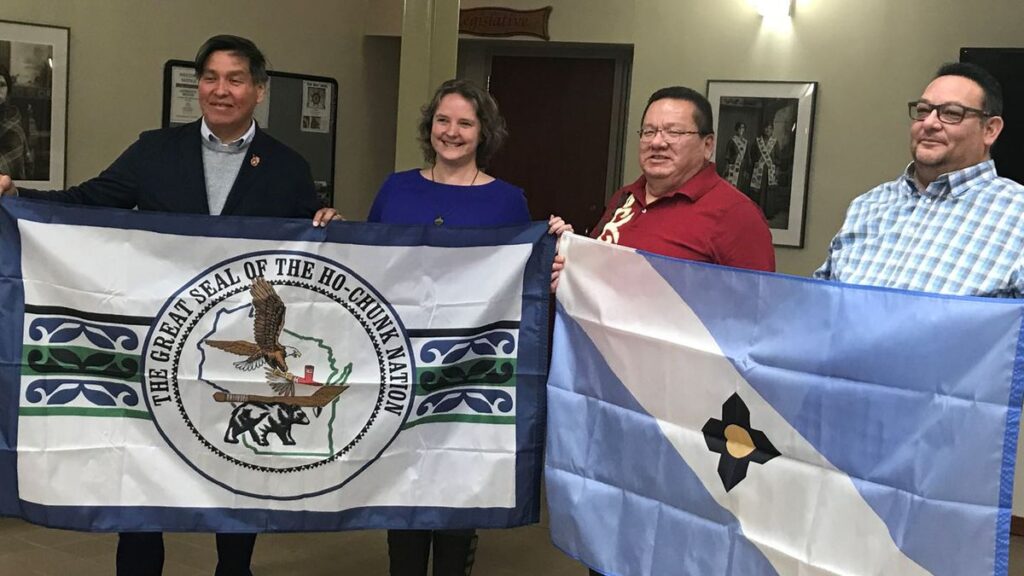 The Ho Chunk Nation flag will now fly in front of the Madison Municipal Building in Madison, Wisconsin. Mayor Satya Rhodes-Conway said the “the City of Madison is located on the Nation’s ancestral land” and she is right. The Native Flags should fly on all ancestral lands next to the colonialists’ and we’ve been saying this for many years. And marijuana should be completely legal for medical and non-medical use. Conservative Madison is not leading the charge in Wisconsin. The cities of Monona and Sturgeon Bay are more liberal under this measure. These simple adjustments should’ve been done a long time ago. Where is this leader of ours from again?

Gay Mayor Satya Rhodes-Conway moved over to Madison, Wisconsin from Coastieland when she was around 30 years old. That got me thinking, I know her predecessor Jewish Paul Soglin is from Chicagoland, so where are “our leaders” from in Wisconsin? Clearly, many of them come from Illinois and Minnesota. But our mayor now is from New Mexico, grew up in New York, and spent time in California. That’s not even Midwest. Don’t even get me started on Mr. Colorado-Iowa Scott Walker.

Madisonians should know of Mayor Paul Soglin. He moved up to Madison at adult age, for college, as they often do, and then sat in the mayor’s chair for about 22 years from 1973 to 2019. I voted for him at least once. Didn’t have much choice. I have seen him once in my life as far as I know (1989-Present). He was in the room working on some whatever the fuck doesn’t help working people when I had to plead my case just to get a bartender license on 1/6/2015. The people judging me on the panel recognized me and said something about “Teach Me How To Bucky”. They had a good laugh about me. I felt uncomfortable most of the time I was there, as I always do in courts and other criminal justice buildings.

At one point, the Black security guy (might’ve been the only Black guy there) told me “You’re on TV” and pointed to the camera in the corner of the room. Black guys are so quick to “hey be careful man” when I’m getting a little perturbed. They can sense me getting hot, like they understand why I’m getting mad but also know it’s futile in that situation. This seemingly inherent Black Man quality is not like Whitie where they use any excuse to cut you off, discredit you, and shut you down. One more time for the Black Dudes. I love that about African Males. And don’t worry, we’re everywhere – in every country. They hate that about us. We can be divided but we can’t be broken. Also, I’m kinda curious if I was on local access? Can somebody get me that clip please? Thanks.

Since that same year Soglin took over for the first time, in 1973, Madison has seated 3 mayors from Wisconsin and 3 from outside the state. Joel Skornicka served from 1979-83. Joseph Sensenbrenner (Catholic) served from 1983-89. Dave Cieslewicz (Catholic) served from 2003-11. Those 3 from Wisconsin served for less time than Mr. Soggy by himself. Joel is from Green Bay and recently passed. Joseph is from Appleton. Dave is from West Allis (suburb of Milwaukee).

Thank God Tony Evers is from Plymouth. The governors have been becoming disturbingly more distant and longer in office since 1983 (my lifetime-ish). Also, the Democratic and Republican parties, nationally, since 2000 (my lifetime-ish), have not seen this close a 50/50 split since post Civil War in the late 1800s during Reconstruction and the Gilded Age, going into the so called Progressive Era. An important time for civil rights, if you recall. This is an important time for civil rights, if you’re aware. And no, that’s not “the difference” if you’re looking for “the answer”. If you’re constantly on the lookout for those kind of shortcut answers in life, just kill yourself now and save us all the trouble.

Notice the strategic lack of religious affiliation shown for Joel Skornicka, Satya Rhodes-Conway and Susan J.M. Bauman. They do that too – try to frame their lives so that they’re outside of what they would consider barbaric factors such as hometowns and childhoods, religious, familial and communal upbringings, and age. They want to appear outside of time itself. As a matter of fact, try to find out where Susan J.M. Bauman is from, how old she is, and what her affiliation was/is.

I’m not hiding that I was baptized and confirmed Lutheran, even though I obviously don’t consider myself a devout Lutheran or Christian. I make fun of the institution of Christianity – harshly – all the time. I’m likely part Jew too, and you know how ridiculously ignorant and privileged Jews are traditionally and/or as a whole in comparison to other ethnic and racial groups. I’m not an Evangelical Christian, Jew, Muslim, Atheist or Agnostic either. I must be the most transparent person out here and that’s why I’m treated like a ghost! Duh, Beefo!

A lot of these people hide where they’re from on purpose to brainwash you into thinking they’re from a similar background. This is Politics 101 and I’m sure there’s a specific name for that government-approved brand of malicious intent. I will explain to you – in detail – the who, what, when, where and why. I’m not the embarrassed constantly shouting down at others that they “should be embarrassed”. That’s what slavers do. When y’all learn more about life you will find that those people are embarrassed with themselves, and use their insecurities to project their hate on us, because they can, and we can take it, because we’ve had to for thousands of years.

In Madison, we get a lot of this Whitie-College Boy/Girl-Catholic-Jew-Gay thing. Separately, some of those are fine. I love the Jews, gays, Catholics, college students and graduates, and those considered white about the same in general. Same with any group. Or at least I try. They don’t get paid to try, as they say. It’s the hipster alternative rock-jazz-hip hop-edm pc words with hyper moderate policy, splitting the population in half, gotcha journalism, cancel culture, a lot of sipping beverages in times when points need expanding, eye rolling, ummmmmming, gossipy whoring, undiagnosed passive aggression, sarcasm and multiple personality disorders, strategic enslaving of ethnic, local populations using elitist white collar agendas, hiding indoors, subdissing, lying, they went to UW-Madison or else, and all that… shit. Just old, dead, useless, shit. They even got their racist allies in the Black and Brown communities going full anti-multiculturalism, anti-workers rights, anti-working class, anti-ethnicity, anti-freedom of speech, anti-native, anti-Clifton Grefe, anti-Beef, and anti-what will help the most and most in-need people – here.

When I say Madison here, and elsewhere depending on the context, I don’t mean the inanimate city itself or the parts of it we have access to, I mean Madison the institution. They need us to fuel and stay behind Madison the institution. It’s their whole thing in keeping us in this “bubble” of Madtown – to be their playground, battleground, testing ground, little buddy, watch my back while I stab yours, Cheesehead stereotype to the almighty “ruling” class-race. They sure do love that “ruling” and “dominant” and “conquering” terminology though don’t they. I purposely avoid it because I know it gets those fascist-rapist-racist-capitalists all horned up and ready to go.

The weakest people in Earth’s history have always loved taking pride in the torture, segregation, censoring, blacklisting, miseducating, poisoning, brainwashing, genocide and enslavement of the “lower class”. They need to force their Macmillan, Mcgraw-Hill, Wiley, Pearson, Scholastic oil books and other Texas Instruments, alongside the Webster and Oxford Dictionaries, and other non-doctorate level doctorate “education” that they “earned” because privilege permits and encourages it.

I’m not the one that needs to “smoke another bowl” and “find my inner peace” or whatever you hippy faggot neo-zionist pseudo progressives are still pushing from your retarded generation’s/class’s ’70s-’80s agenda of “baby boom boom, smash the button, how you doing?” Yes, I know you learned it from your possibly even less impressive parents. You know your legacy will only be more and longer eclipsed by mine the further you keep me a slave. Your descendants will laugh at your pathetic work ethic and say, “They really should’ve just given Cliff an office job.”