A dude from Milwaukee County just got back from a trip to South Africa and brought back the Omicron variant of COVID-19 with him (December 4). The variant was discovered first discovered over there last month. I met someone a couple weeks ago that wasn’t allowed to move back to Canada because they won’t allow her dogs across the border during this COVID fiasco. Apparently other people are flying all over the world during this time of crisis. I suppose I would be too if I had the money for it. I can name every country on Earth but I’ve only been to the U.S. and Mexico (though I have been to more of contiguous America than most people). According to Wisconsin Department of Health Services, the man was vaccinated and had his booster. Could be a few months until we have a vaccine available for this one. There’s been a recent uptick in overall cases too so it looks like we’ll be keeping our distance for a while yet. Well, Asians will be at least. Asians seem to be significantly better than non-Asians with the mask and personal space thing. Stay strong compatriots. 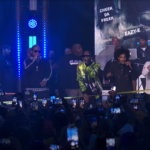