Meraki: A Woman Among Boys [EXCLUSIVE]

Meraki is a baddie with a beautiful exterior and brilliant mind. The Milwaukee, Wisconsin singer has found her way through exceptional circumstances, yet she keeps a positive outlook on life as if she were a friendly neighbor. She’s also found a way to maintain her sexy in an industry run by men, without selling her valuable soul. Her voice is butter, her skin chocolate, and her aura a new wave fusion of tastes that has garnered her attention across the middle of the map.

The key to her artistry: “To put your soul into your craft,” she told Basement Made in her marked sultry voice. “Instill substance, emotional connections.” I damn near caught a chill hearing such a grown perspective from the young lady. Meraki is going deep and she ain’t playing. Her passion and love for the craft will shine through on her upcoming project Foreshadow. “I wanna be able to tell my heartbreak from beginning to end, as if I foreshadowed it,” she explains. “I’ve been working on a whole new sound.” Play her latest below, a groovy and breathy “Exhale” record with producer Austin Marc.

This all female “VENUS” showcase speaks to Meraki’s path as a woman in Hip Hop (April 10, 2016). “The industry is mainly male dominant, there’s less expectations of rappers,” she explains. “I have to go to a male for everything.” She wants to see more talented ladies in the picture.

Meraki used to pay $50 to a producer that would let her record for 3 hours. But after she told him that she wanted to keep it professional, the producer brought it back up to the standard $50 per hour. This is a popular engineer in Atlanta, Georgia. “Now that I’m more involved in the music industry, it’s made me more comfortable,” she says. Meraki is a woman among boys, and we need more like her.

Growing up, the artist moved back and forth from Milwaukee to Atlanta. “I used to live on Concordia,” she says. That’s on the Northside. “My mom had me at a really young age, and she had to go to school around that time, so I had to move in with my granddad…”

The artist went on to explain how her turbulent past has helped her develop a wavy new sound, through her love for music. Her grandfather played blues and jazz. “He’s a Southern man,” she says. The young queen laughs, remembering how many Nat King Cole records she knows.

Eventually, Young Meraki got a hold of her grandpa’s radio and locked herself in the bathroom, bedroom or wherever she could be alone. Then she turned up the volume on The Jackson 5, like the kid at the start of “Black & White”.

Meraki moved down South in 5th grade. “I hated Atlanta,” she says. The Milwaukee native had a tough time adapting from the “hood” to the “suburbs.” In 6th grade, she returned to The Mil to live with her biological grandmother. “She was a really classy woman,” says the smooth R&B artist. “My grandmother was more Aretha Franklin, Lauren Hill, Anita Baker.” Sadly, her OG caught cancer and passed when Meraki was in 8th grade. She’s been in ATL since.

“I started off as this hipster,” the artist says of her sound. Meraki’s traveling past traversed her through a unique musical landscape. She hails from The 4, and later got more into EDM, which lead to dubstep, and eventually to her scouring the vast canvas that is Soundcloud. The new age soul singer spoke to her affinity to Philly native Jazmine Sullivan too. “I think if you listened to 3 of her songs, you’d hear major influence on me,” she says.

She shows love to St. Louis, Missouri producer Ammaad Santiago for taking trips down to Atlanta every 2 weeks for a few days of blocked out sessions, Tek.Lun of Soulection, “essential” Aaron Mac, and Clnt Ford. Meraki has worked with plenty of producers. She’s also collabed with Wisconsin emcees Von Alexander and Trapo. “I got a name in Milwaukee because of Von Alexander and 88.9,” she says. The singer is hypnotizing on the “HurtALittle” record.

Meraki emphasizes the need for the whole city to back the talent. “Milwaukee artists get to a certain level and they don’t wanna help nobody.” She understands that selfishness can be the result of compartmentalization, but also recognizes that certain artists are blessed with powerful connections that others are not. Meraki is thinking about the bigger picture. She had a post go “viral” recently, a few days after I published “The Wisconsin Soul” to HipHopDX. 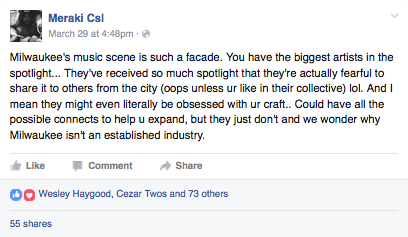 Atlanta emcees have been dominating the Hip Hop industry for many years now. “What you hear in Atlanta is what you hear on the radio,” she says. Folks are starting to catch wind of Meraki’s hometown, though. “What’s crazy is people actually know about Milwaukee,” she says surprisingly. The artist says Atlanta’s Tommy Swisher – who also asked her to be in one of his videos – mentioned IshDARR, Pizzle and Von Alexander. Also, Kid Play told her that he’d been “studying Milwaukee music.”

Although her battle has been uphill, the artist insists that “the people back home are the best supporters,” and that social media plays a huge role in connecting people in today’s digital music industry. Look out for the Foreshadow project and a pair of upcoming loosie records – one with Monte Booker, and the other with an EDM club DJ.